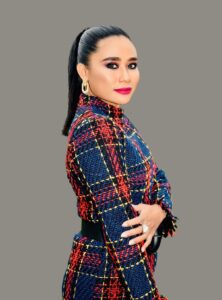 I am a passionate makeup artist since 2007. Originally from the Philippines, I have been living in Germany and Switzerland for almost twenty years (yes, I speak German as well). Through my work at Christian Dior and my training at the Academy of Freelance Makeup Artist in London, I had the opportunity to learn from some of Europe’s leading makeup artists. I strongly believe that good makeup should magnify the beauty that already exists. As freelance makeup artist in Zurich, I am excited to make all my energy and experience available to you and your beauty. If you are interested about my story and inspirations, please read on.

With  passion and love,

Back in 2003, I had access to different movie sets and locations through my then husband who was an active director of photography in Germany. I was inspired by the spirit and atmosphere on the film set. I admired the head makeup artist and his team. At one occasion, I pulled myself together and told him that one day I would love to work as a makeup artist, too. He told me to come back once I had finished makeup school.  In 2007, I finally enrolled myself for a makeup academy in Munich and received my first makeup diploma after a three months Intensive course. On top of makeup, I learned everything about special effects, bald cap and hairstyling. I went back to the film set and I showed my work to the head makeup artist. He was going to talk with me about a next project but meanwhile, I had accepted an offer as makeup artist for a musical theatre. Later, I took my first counter job working for Benefit Cosmetic in Munich. In my makeup chair I would sometimes have actors, actresses and politicians. After a special training at Benefit, I became an eyebrow expert who specialised in brow grooming, styling, coloring and waxing.

Going back to the movie set, I managed to assist a few times but I realized it was not really what I wanted to do. The last job I did was shooting the video campaign for the Hotel Schloss Tegernsee.

In 2012 I decided to move to Zurich. I had visited Switzerland some time ago during the production of the movie Marmorera at St. Moritz and Zurich. I was moved from the beginning by the country’s beauty, its landscape, lakes, cities and mountains. Never would I have dreamed that this would once be my home. However, finding and applying for a job was tough and I had many ups and downs. I had almost given up when I received an interview call from Christian Dior in Zurich. They hired me and Zurich became my new home. 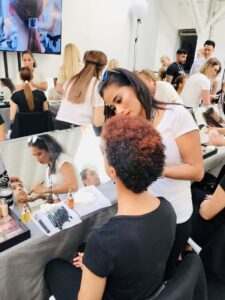 As a full time makeup artist at Christian Dior for seven years, I was able to gain an incredible amount of experience. My priority has always been to enhance my client’s beauty that is already there. I don’t want to transform them into something they are not. The key is to embrace yourself, to appreciate your beauty by using makeup. Some people do not realize that makeup is a wonderful tool to start your day. Use it. By simply enhancing your natural beauty, it can lead to so many positive things. It can change your mood, sometimes it can inspire you to choose your outfit of the day or it can lift you up when you look at yourself in the mirror and proudly say “I look amazing today!”. It is all about a positive mindset. You look beautiful so you feel beautiful, too. Working at various Dior stores or counters as makeup artist was the best school for me. By serving my clients, I learned about a variety of faces, personalities and cultures all over Switzerland. This experience puts me in the position to give you the makeup you want. By simply seeing you smile after my treatment gives me fulfillment that I am doing my job right. I love what I do and as much as possible I want my client to feel special in my makeup chair. I want you to experience something unique and magical. It is my passion to create something special to make your day or event unforgettable. I had further broadened my skills at the Dior Backstage International Makeup Artist Master Class in Paris. During my last year at Dior, I was working as a makeup coach and I enjoyed sharing my experience with my colleagues.  Until today, I still work at Dior as freelance makeup artist for beauty schools, eyebrow services and beauty events. Through Christian Dior I had the opportunity to work backstage at various events such as Hear Foundation Gala, Red Cross Gala and Zurich Film Festival ZFF. In August 2019, I had the opportunity to attend the master class of one and leading international celebrity makeup artists Yasmin Heinz at the Glossarium Makeup Academy in Basel.

In September 2019, I decided to upgrade my knowhow at one of the best freelance makeup academies in London. In life we should never stop learning. At AOFM, I once more improved my techniques, learned more tricks, other products, textures and the latest trends in the makeup industry. From nude, to body painting, airbrush techniques, historical looks like 20s, 60s, 70s, black and white, bald cap, galaxies characters. All the way to Avant Garde, there are no limits for me, everything is about art. On top, I learned nails and hairstyling as well. Our coaches were some of the greatest names in the industry having done Game of Thrones, X-Men, magazine covers and fashion weeks. They were the best in their fields. During our hairstyling week our coaches where from Toni and Guy and some had worked for Chanel or Fendi fashion shows. There were so many unforgettable moments. Two I want to emphasize. One highlight was the fashion week class, instructed by Yin Lee’s, one of the best coaches in London who works as Head makeup artist at fashion weeks and has done international covers from Harper Bazaar and Vogue. I can only dream on. The experience that day was surreal. She gave us a glimpse on how things should be done backstage. It was a tough day but full of fun. The experience was unforgettable for me and I love Yin’s energy. I look forward to work in her team one day. To be a part of her fashion week team is my ultimate goal. As they say: think BIG and dream BIG. Everything is possible. Another highlight of my London stay was the special effects/SFX week, trained by the one and only Michelle Web. She works for movies and one of her biggest project was doing X-Men. During the SFX classes I learned to makeup movie-style effects like bruises, wounds, burns and zombies. Though one week class was not enough for me the five weeks intensive courses was fully packed. Anyway, there would be so much more to tell. If you have any questions or are interested in my services, please feel free to contact me and I will be happy to assist you.

With love and passion,